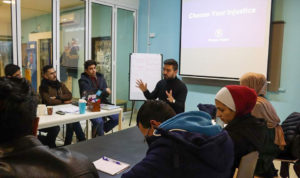 Eric Dawson founded Peace First in 2009 to empower young people to work toward a more just and peaceful world. He began in Boston and over time grew his nonprofit and its powerful movement into 140 countries. A small grant from the Gates Foundation allowed Peace First to explore expanding into the Mideast and North Africa, the so-called MENA region, by supporting a set of teams in different countries.

But recently, as the grant was ending, Peace First reached a “choice point,” says Eric. “Do we continue at a slow pace of growth, winding things down in the MENA region, or do we scale up, and place one of our two or three big bets in this region? Each pathway had a myriad of issues connected to it that could put the organization’s future at risk. That’s one of the reasons I turned to AREA; I was unclear how to understand the choices, let alone make the decision.”

Eric began by identifying Peace First’s Vision of Success: Peace First’s programming is well suited to successfully support young people’s peace projects in the MENA region while continuing to honor and enrich its other commitments.

He then derived his Critical Concepts:

Listen to my conversation with Eric and learn how he and Peace First made this big decision.